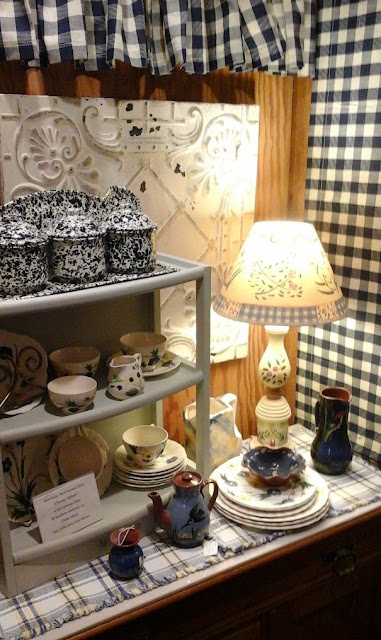 Blue Ridge China was manufactured by Southern Potteries Inc. from the 1930’s until 1957.  Well known for their underglaze decoration and colorful patterns, Blue Ridge pieces have been popular as dishware for cottagey and country décor.  The underglaze technique made the decorations more durable and even though basic patterns were used, no pieces are exactly alike due to all being hand-painted. Hundreds of patterns were made and, for the most part, painters freehanded the details.
These differences made each piece an original work of art and truly distinctive.

By the time World War II broke out, Southern Potteries was one of the largest producers of china in the United States.  Its workforce was completely unionized and almost half of the employees were painters.  Starting wages for painters was 13 ½ cents an hour during 1941!  Although Southern Potteries employees over 1,000 workers and a leading producer of china, the company was unable to overcome the onset of plastic dinnerware introduced during the 1950’s.  By the end of 1956, Southern Potteries was down to approximately 600 employees; many of them only worked part-time.  In January, 1957, the board of directors voted to close the doors and did so without resorting to bankruptcy, providing stockholders with a final dividend.

Over the years, Vintage Gal Antiques has carried several patterns of Blue Ridge China.  Currently, I have several pieces of the Chicory Pattern in the fluted, colonial shape, including a sugar and creamer set.  This pattern, primarily in yellow and blue colors, is one of the more difficult patterns to find.  I’ve displayed it with some Torquay glazed earthenware that is also very collectible. I love the rich cobalt blues alongside the happy colors of the Blue Ridge China.  Also featured is a large vintage ceiling tile and a new blue spatterware porcelain enameled cannister set.

All Blue Ridge China pieces available separately or as a set.  Please email for price list for all items.