The Nevada City Elks Lodge Antique Show-End of the Day!

Just got home from a long day selling at the Nevada City Elks Lodge Mining & Antique Show. I was up at 4:30 this morning so I could get my 2 ½ cups of coffee in before getting the day started. The show started at 7am in the parking lot for all the mining and rusty stuff and the indoor antique show started at 8am.  The drive down to Nevada City was perfect-no cars except me heading in that direction at 6:15am!

I love selling at shows!  I love the setting up, arranging my stuff on an 8’ table so everything is decorated and fits just so, and then when the show opens, greeting old friends and talking to new friends who all share a passion for the same things I do. It just beats the sterile feel of selling on Ebay. I like buying on Ebay, but selling is so impersonal. I need that contact and conversation. I learn so many interesting things about what other people collect. Collecting is contagious!  Some folks are obsessed, some buy only for their décor, others just buy what they like and new collectors are trying to add to their beginning collections. I have a dealer friend who is 89 years old and still loves the thrill of selling and buying! She is amazing, and  I hope I’ll have the energy she does when I turn 89!

At today’s show, I met Karlee, who reads my website!  It’s so exciting to know that people actually read what I’ve posted!  Knowing that I’ve reached even one person makes it so much fun for me and I appreciate all the kind words that I’ve received.  Karlee likes old quirky advertising and she bought several things from me. Thank you Karlee, so nice to meet you!   I hope you enjoy decorating with the Flapper Curling Iron and the quack medicine.

They will be conversation pieces, for sure! 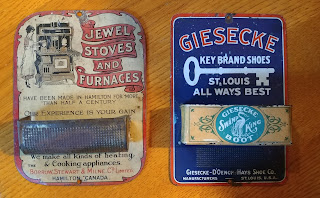 I don’t usually buy things for myself at shows because I’m trying to unload, not add to my overloaded collection of stuff. But every now and then I find something I can’t live without and today was that day. Not just one thing, but three!  It’s nice to be part of the “dealers circle”, because I was given prices from dealer friends that I just
couldn’t pass up. I collect advertising match holders. They are hard to find at shows and rarely seen at shops, and are usually beyond my comfort zone for price.  But, Cecil Sanders had 2 of them and he knows I collect them. Cecil is the chairman of this show and at one time, was featured on American Pickers. He has an amazing personal collection, but that's a whole other story!   He sold both of the match holders to me for a fabulous price and they’ll go on my kitchen wall with the rest of my collection. Love them!

The other item that I thought long and hard about was a wonderful store cannister bin for tea, coffee or sugar that John McWilliams had on his table.  It’s most likely from mid-1870 to 1890 and I love the lithographed tin material. Storage containers were so much more interesting during earlier times. It will also go in my kitchen with my other antique tins. The back of the canister has a hallmark “Ginna & Co. NY, Decorators Sheet Metal”.  My research found that it was made by Ginna & Co. in 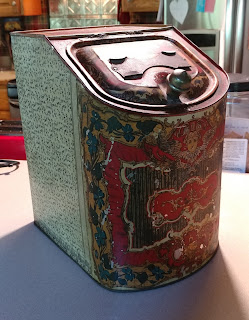 New York during the late 19th century who was most known for its intricate and elaborate color lithography. Ginna started production in 1874 and was later acquired by the American Can Company in 1901. Very few tins are actually marked by the company and I am thrilled to now own one of the earlier examples. 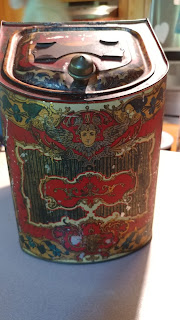 So, it was a successful show and a really fun day in Nevada City!  Already planning for my next show!  Home now and enjoying a nice glass of wine. Cheers!