Hey, American Pickers~Look What I Found! 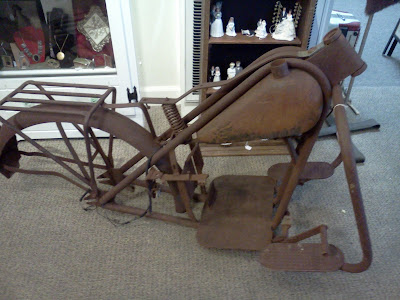 One of the first things you’ll see when you walk into Vintage Gal Antiques is this rusty old motorcycle frame. And always~the first comment is “This looks like something the “American Pickers” would find!” I absolutely agree! If you haven’t heard of them, the American Pickers are two guys who travel around the Midwest looking for rusty junk and unusual treasures. The show is on the History Channel and each week they investigate old barns, trash pits and fields, meet some really interesting characters (and hoarders) and find some great stuff. They especially love old bicycles and motorcycles and would covet this frame!
What is it? It’s a Simplex Automatic motorcycle frame. The Simplex was the brainchild of Paul Treen, who started the company in the late 1920s with a $25 investment. The Simplex was built in New Orleans and was the only motorcycle ever manufactured in the southern part of the U.S.  Production of the Simplex Automatic began in April of 1953 and continued until the end of motorbike production in 1960.
I’ve used this frame as yard art, holding a pot of geraniums, but it would be great to find someone to rebuild it and get it running again. So…..come see me, American Pickers, or anyone else out there that wants a great little project bike!

Today is the First Day of Spring! 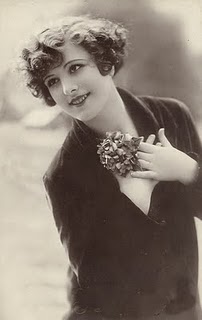 It's March 20~the first day of Spring~and we have snow, snow, and more snow here in Downieville!  Vintage Gal Antiques will be re-opening for the 2011 season around mid April.  I'm excited to get the shop open again-it's been a long winter! We did some traveling the last couple months and  I was able to pick up some wonderful vintage treasures for the shop.  In Victoria, B.C. I found some hand-painted chinaware and delicate English chintz pieces.  And then the jewelry~ah, yes, always the jewelry!  Vintage turquoise bracelets and rings! Some beautiful gemstone necklaces and to round it off- a few ladies antique pocket watches.  Lots of irresistable treasures waiting for you to discover!  Check back for some photos and hope to see you at Vintage Gal soon!