Something New is Coming! 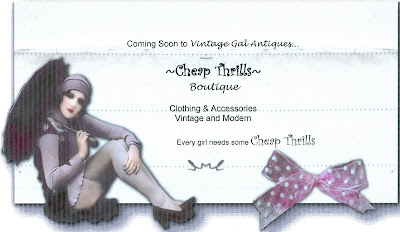 In the Words of the Lone Ranger….Hi-yo Silver!

If you love silver jewelry, I hope you’ll stop by and check out the selection at Vintage Gal Antiques. There is quite a variety; from vintage Taxco sterling with its beautiful aged patina, to more modern silver and gemstone pendants. And who’s to say how many bracelets are “too many”!? Lots to choose from here! 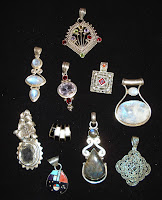 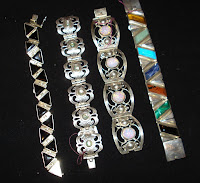 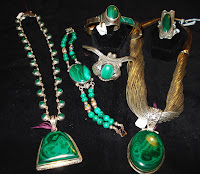 You’ll also find a great selection of marcasite jewery. Marcasite has an interesting history. It is the white form of iron pyrite. Iron pyrite is better known as “fools gold”. Marcasite was first known to be used by the Incas. Later, Native Americans believed they could look into the very soul when peering into a polished piece of pyrite. Their shamans used it as a “stone of power” and their medicine men used it in healing rituals, earning it the name of the “healer’s stone”. 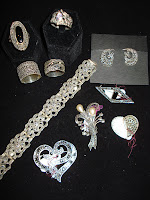 Marcasite was extremely popular in the eighteenth century. By the time Queen Victoria took the throne, brooches, particularly mourning brooches, earrings, necklaces and rings made from marcasite were worn by everyone. This is when marcasite jewelry was at its height of popularity, because when crafted properly, it was as beautiful as diamonds. In fact, marcasite has often been used as a substitute for diamonds, because of cost and availability and has been called the “poor man’s diamonds”. There are many beautiful marcasite rings, brooches and bracelets available at Vintage Gal Antiques. 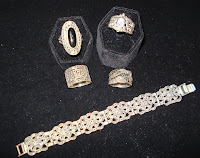 I just can’t seem to help myself when it comes to rhinestones and glitter! In addition to some wonderful sparkley jewelry, Vintage Gal Antiques has some really cool 1950’s style jeweled boxes, cigarette lighters and pill boxes. Wouldn’t be fun to carry your Tylenol in one of these glamourous pill boxes!  Much more interesting and easier to open than those child proof plastic bottles!

Or how about some beautiful hatpins from the Victorian era?  The ladies of those days didn't need to carry pepper spray~their hatpins were deadly weapons if needed! 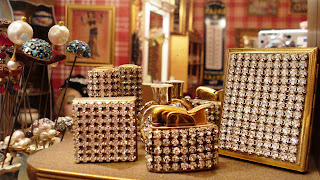 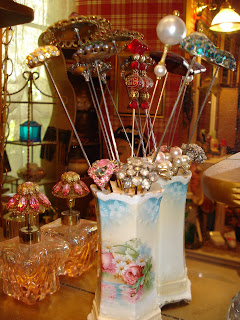